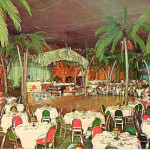 Imitation leather covered the walls, satin lined the ceiling, furniture was upholstered in Zebra stripes and fake palm trees circled the dance floor.  Just 2 days after Thanksgiving, the Holy Cross football team upset Boston College at Fenway Park earlier in the day.  It was November 28, 1942 and the Cocoa Nut Grove restaurant/dance hall located in Boston’s theater district was jam packed with celebrating patrons.  At 10:15 pm the fire broke out. By 10:18 the main dining room was fully engulfed.  492 people would die.

A young couple, wanting privacy, reached to a palm frond to unscrew a 7.5- watt bulb. Told by a bartender to restore the light, a 16-year-old busboy climbed upon a seat, and then struck a match to locate the socket. A moment later, someone noticed flame along the satin ceiling. At first, people were amused by the antics of waiters trying to douse the fire with seltzer water.

The Triangle Shirtwaist Fire of 1911 in NYC, the Cocoa Nut Grove Fire of 1942 in Boston and the Station Nightclub Fire of 2003 in Rhode Island all demonstrate the tragic outcomes that can result when interior finishes combust and physical components make exiting difficult.

These tragedies of the past impact today’s office interiors by being the genesis of current Fire and Life Safety interior codes throughout the country.

For example, today, in the city of Boston,all upholstered office furniture MUST comply with a code known as Cal-133. which comprehensively tests combustion, flame spread and gasses emitted.  A design professional CANNOT specify a chair from Crate and Barrel for a small office space in Boston because residential retailers do not have their furniture Cal-133 tested.

Other areas that must comply with specific codes in a office, commercial and institutional interior settings for safety’s sake are:

These codes grew out of unspeakable tragedies. The lessons learned result in safer interior spaces today.