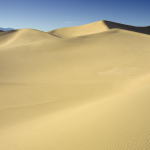 Recently I read Eat That Frog, a book about overcoming procrastination by Brian Tracy, a leading authority on personal effectiveness.  Procrastination and lack of time management skills seem to be at the root of most disorganization found in home and business offices.  I particularly liked the following story he tells about oil barrels across the Sahara Desert.  What project are you putting off today?  Pick one task, no matter how small, to get started…PICK YOUR OIL BARREL…today…and tomorrow look for the second!

The desert was 500 miles across in a single stretch, without water,food, a blade of grass or even a fly. It was totally flat, like a broad yellow, sand parking lot that stretched to the horizon in all directions. More than 1300 people had perished in the crossing of that stretch of the Sahara in previous years. Often drifting sands had obliterated the track across the desert and the travelers had gotten lost in the night. To counter this lack of features in the terrain, the French had marked the track with black, 55 gallon oil drums, five kilometers apart, at exactly the curvature of the earth as you crossed that flat wasteland. Because of this, wherever you were in the daytime, you could see two oil barrels, the one you had just passed and the one five kilometers ahead.  And that was enough. All you had to do was to steer for the next oil barrel.  As a result, we were able to cross the biggest desert in the world by simply taking it “one oil barrel at a time.” In the same way, you can accomplish the biggest task in your life by disciplining yourself to take it just one step at a time.  Your job is to go as far as you can see. You will then see far enough to go further.