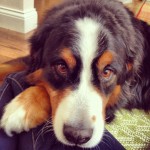 First I heard the huffing and puffing.  Then I felt the ground begin to rumble.  It was then that I looked up to see 78 pounds of double layered black fluff come barreling at me.  As he raced by me, I soon realized that I was not the intended target since his eyes did not make contact with mine nor did his pace slow one iota.  Rather Bruschi, our neighbors’ beloved Bernese Mountain Dog (Yes we do live in New England Patriots” country) had lasered in on a fox and with focused determination was in hot pursuit.   No amount of clapping, calling or coaxing would interrupt Bruschi’s goal.  Despite his age and ailments, with single mindedness and total effort he would get focused on the chase.  He was intent on catching that fox.  That was of course until he came to the street…Bruschi after all obeyed his “terms of containment” and the street was strictly off limits.  And so he jauntily turned, trotted back home…proud of his effort and content that his owners’ yard was at least for the moment…a fox-free zone…task accomplished!

In order to appreciate Bruschi’s  determination, you must know that this dog LOVES to socialize.  The fact that he whizzed past me and in doing so passed up an impending neck scratch is testament to his focus.  I found this very impressive.  In fact, I became inspired…what a terrific quality to have when one is about to tackle a project.  “I want me some of that focus”, I said under my breath.

Organizing a work space is exactly the type of project that requires focus.  It can be overwhelming at first but there are steps that you can take to make organizing an office space easier and quite achievable.

Pick one thing and focus it on it.  Imagine Bruschi chasing 2 foxes at the same time!

STEP 3:   BLOCK OUT THE DISTRACTIONS

Shut off the phone, shut the door and announce to everyone that you are unavailable for a while.  Even if it is just 10 minutes!  If you recall, Bruschi even ignored the opportunity to get his neck scratched!