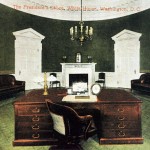 With Presidents’ Day just around the corner, I wondered…just how ergonomic were the desk chairs of our Presidents …past and present?  For years I have promoted the importance of a good ergonomic desk chair to maximize working productivity.  Ergonomics is a fancy word for “enhanced work achieved through good posture” Most good ergonomic chairs have one thing in common…they offer adjustability and comfort.

In 1909, President William Howard Taft must have endured long painful days during his presidency by the looks of his chair.  Oh sure he was in constant battle between the Progressives and Conservatives but he was also one our more rotund Presidents weighing in at 355pounds.  His desk chair as shown in this photo from whitehousemuseum.org did not have today’s common ergonomic features like adjustable arms, adjustable seat height and sliding seat pan BUT he did have a swivel base!  The swivel base had been invented about 35 years earlier.  AND guess who invented it?  None other than President Thomas Jefferson!  It is written Jefferson chopped off the legs of a wooden Windsor chair, put a dowel down through the center and made it swivel!

Besides being the premier impetus for the space program, President Kennedy was the first president to implement an “ergonomic” type of thinking when it came to his desk chair.  “Ergonomic” you ask?  Basically that’s trying to be as comfortable as possible while you work.  Before even moving into the White House, technicians at the Gunlocke Company worked together with President Elect Kennedy’s physician, Dr Janet Travell to engineer a chair that would give maximum support and relief to his ailing back. Apparently it needed additional back support which the President achieved by adding another back cushion.

President George Bush took ergonomic design to new levels.  Inspired by luxury aircraft seating, His chair, the Presidential version of the Concorde series manufactured by Global Industries was custom made for the President. This chair is totally adjustable using finger tip button controls built in to the arm rests. It is available for purchase through Global Industries with a list price of $5400.  I had the good fortune of trying one out and it is indeed comfy.  President Obama used it for several months before switching to his preference

President Obama did what EVERYONE should do before deciding on a desk chair…try it out!  Here he is shown trying out several options

…and what was President Obama’s final selection?  He’s been photographed with the red leather chair which is made by Smith & Watson (NOT to be confused with Smith & Wesson the gun people).  Other photographs show the same style except in brown leather.  My guess is he used the red leather chair until the brown leather chair was available (oh the perks of being Commander in Chief)  Smith & Watson is a premier American manufacturer specializing in traditionally historic furnishings.  This model chair is Georgian in style and designed to echo seated posture, the orthopedic-firm support structure has a super reinforced, hand-tied, tempered-steel spring foundation, wrapped in foam and secured by webbing for years of sag-free seating…oh and can be purchased for $6950.